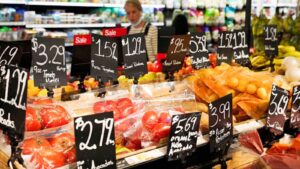 The reducing economy is a concern for USA Government, and also it can create a political issue between the parties. The US economy has been reduced to 0.9 within last three months.

This is second time the country has seen its low percentage in economy. This will affect gross domestic product, in US. In Second quarter we have seen economy reduced to 0.9% comparing to the decreased annual rate of 1.6 last time.

The Country have seen two continuous quarters of gloomy growth, which is often examine as recession, it’s not an formal definition. National Bureau of Economic Research is a nonprofit organization, which look for that weather US economy is in a recession. This organization consists of eight economists the experts calculate the factors, and reason of decreasing economy.

The economy will play a important role in midterm elections, the white house is repulse against calling the current economy a recession.

President Biden point out, growth in job and business investment from outside US, (foreign investment) will give strength to economy “That doesn’t sound like a recession to me,” Biden concluded.

With so many jobs in U.S this is not a recession

Condition are unique in the economy Janet Yellen Treasury Secretary said in Press Meet, in her appearance on NBC’s,  she said the two low quarters is a sign of recession, this is negative growth country have seen.

We are creating lots of jobs, she said I believe this is not recession.

The key worry is that it will incapacitate the jobs growth in US, looking to the GDP report. It is clear that businesses had cut back. The Federal Reserve have controlled and tighten the interest rates. So, it is less money to invest.

The increased supply of Inventories from Retailers have created problems, so those businesses were spending less. The housing got difficult during the pandemic, so this will start to cool down with the mortgage rates rising.

Fed have taken measures to fight high inflation, the Federal reserve has increased interest rates, the wages have increased in U.S.A due to this reason people were seen in restaurants and also put the money into travel. The fear of recession have increased considerably. This points to Fed that the authority body take strong decision to stop recession.

The economic data that Fed got is quite mixed. U.S economy is giving out jobs, she said every month jobs are increasing, it is positive sign for the economy.

Yellen said, we are not in recession, the economic weakness, we don’t notice it.

The consumer spending has been strong, she underline that all statistics says that it is positive data, on the credit quality of Americans.

The White House points out that the economy is not in recession, the country has seen two negative percentage first 1.6% second after three months 0.9%, which is a low from last time. White House remains strong when talking to people about U.S.A economy.

The report of a poll conducted through Politico poll, majority of 65% voters voted at the poll, these are registered voters. The voters said they believe we are already in one.

What are the markers of a recession?

The NBER looks positive on recession, it says there is a ‘traditional definition’ of a recession “a significant decline in economic activity that is spread across the economy and that lasts more than a few months.”

The labor market showed positive signs, and during this time the jobs are increased considerably, and the unemployment rate held steady at 3.6%, which is comprehensive low.

Michael Gapen is U.S. economist he says I believe that we will not look to the data, and confirm that economy has slowed down and we are in recession

It is upon people of America, that the current economy satisfies a specific highly-technical definition, or it doesn’t.

Parts of economy are slowing already

The prices are high, the economy is slowing, this is clear to everyone, the prices are at decade high. The Fed is increasing interest rates, to control housing market. The central back has also raised rates by an additional three-quarters of a percentage point.

The decrease in percentage of inflation, has created attention of everyone, and it is important to dig into the elementary data. The household spending kept pace with inflation.

“It’s the pieces of the puzzle that matter when you’re looking at GDP,” says Michelle Meyer, U.S. chief economist at the Mastercard Economics Institute.

Country should not lose jobs, there is so much indecision, and  the country is experiencing slump, we believe that all sentiment and expectations matter to us. Fed Chair “Jerome Powell”

Also Read:  In a effort for release of Brittney Griner U.S. offers a deal to Russia