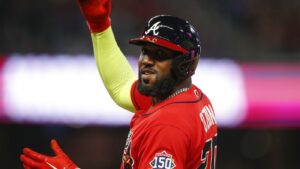 ATATLANTA – Marcell Ozuna is a Baseball outfielder, people call him with a nick name “The Big Bear” is a Dominican professional baseball player. He play for the Atlanta Braves of Major League Baseball. He has previously played in MLB for the Miami Marlins and St. Louis Cardinals. He made his MLB debut in 2013 with the Marlins. He is married to Genesis Guzman. His parents name is Marcelino Ozuna, Adriana Idelfonso. He play under the jersey 20, he was born on 11/12/1990, in Santo Domingo, Dominican Republic. He was arrested on Friday, on driving the car under the influence, he was arrested in the morning, charged with under the influence of alcohol.


The baseball player Ozuna was talking to reporter for 18 seconds, he spoke to reporters, next he had to play game with Houston Astros. He babble with the reporters made a statement, but he didn’t take any questions. In a question with the police personnel he said do you know who I am, he is arrested with red/watery eyes, on the charge of buzzed in alcohol.

In his statement “The star said it’s a legal matter, I disappointed everyone, I don’t have nothing to say more”. Marcell Ozuna was pulled over at approximately 3:30 a.m. Aug. 19 after he was observed speeding and driving in both the left and right travel lanes along Beaver Ruin Road in Norcross in his Mercedes-Benz SUV.

First time he was arrested on attacking his wife

This is his second arrest, before he was arrested on attacking his wife, he was arrested on May 29, 2021, he was charged with aggravated assault by strangulation and battery. The charges were dropped after he completed a pretrial diversion program.

Ozuna is arrested on Friday for $1830 bond, he is taken to jail at about 4:30 a.m, arrested when he was failure to maintain lane, detain near metro Atlanta. Captured and taken to Gwinnett County jail, he said it’s a legal matter.

“The baseball team Atlanta Braves in their statement said “he know about the arrest, happened this morning, we looking for facts, the team said, we are taking the matter very seriously, the team is disappointed by the situation.  “Until the process in complete we do not have any further comment.” 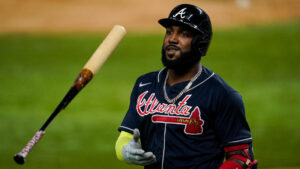 Ozuna missed his Friday game, he do not play the game due to his poor performance on the field. Manager Brian Snitker said. We have no detailed conversation between Ozuna and Snitker, but the manager did talk to the baseball star.

The baseball star Ozuna is under the contract, he is in second year of $65 million contract, it is four year of settlement. He is dropped in his performance, he hit, .338 but unhand .215 for two consecutive seasons. Ozuna is 31 years old.

There is decline in his performance, he is hitting .214 with 20 homers and 46 RBI this season, this happened due to reduced playing time even before the arrest. The manager is not sure about suspension of Ozuna from the games.

The Ozuna was sent to the leave, when the investigation is under process, it was MLB Investigation, reason he missed Atlanta’s World Series championship. Ahead he was suspended for 20 games, under domestic violence, this happened in November, he was draped for attacking his wife. When the spring training started Ozuna apologized to his teammates, and also fans in March.

“I will perform my best, at the ground, at the start of the spring training, ozuna said sorry, to everyone.”

When Ozuna was agreed to go for  pretrial diversion program, reason that he was dropped with previous charges, it was 24-week family violence intervention program.