A Mouthwatering History of Street Food in America 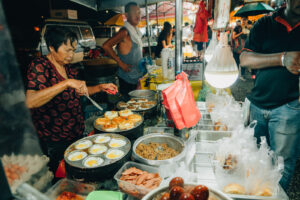 Street food has been around in the United States since before the country even officially existed! You may be familiar with foods like hot dogs, ice cream cones, and pizza etc.  There have been other street food classics throughout the years that have disappeared or evolved over time. Discover them here in this delicious history of street food in America.

The history of street food goes back over 40,000 years

The earliest food carts and trucks were likely just that: carts and trucks. They’d be pushed around by vendors, who would sell whatever they could carry. In ancient Egypt, for example, street food was often roasted meat on a stick—the first shish kebab! When carts became too unwieldy to push around (think about how hard it is to move a cart through a crowd), vendors began using animals to pull them. This eventually led to something like our modern-day hot dog stands. A vendor would set up shop at one location and cook food there, then bring it out to customers as they ordered.

Fast food came about with the first cars

Some food historians think fast food really got its start with cars. While people could always take their lunch to work, they couldn’t eat while they were driving until early 20th century technology made it possible. Suddenly street vendors and roadside diners were able to serve hungry drivers all across America. In addition to hot dogs and hamburgers, these establishments also started serving fried chicken and a variety of other dishes that could be eaten on-the-go.

Though today hot dog carts are associated with fairs and sporting events, they actually started out on city streets. New York City’s hot dog cart industry exploded during Prohibition, as vendors began selling sausages to anyone looking for a cheap bite. By 1932, there were around 20,000 carts competing for space on city streets. The popularity of street food would continue to grow over time—and it’s not just sausages that people love to eat outside anymore! From ice cream trucks to taco trucks and beyond, many Americans still love buying their meals from street vendors. So why has street food been so popular throughout American history?

And more after World War II…

Post-war, street food took on a new importance with American soldiers stationed around the world. Mobile food vendors started to appear across Europe, particularly in countries like France and Italy where American troops were stationed. The initial purpose of these vendors was just for service members to find familiar comforts from home. But it didn’t take long for them to become popular with locals as well—especially once they got used to some strange concoctions like hamburgers and hot dogs. Soon, many European countries adopted their own versions of both fast food restaurants. They also started food trucks based on what Americans were doing stateside; at one point there were even over 70 McDonald’s locations across Germany! While street food was experiencing a renaissance overseas, it was also experiencing one here at home.

Read Also: US inflation cause people grapple with daily needs